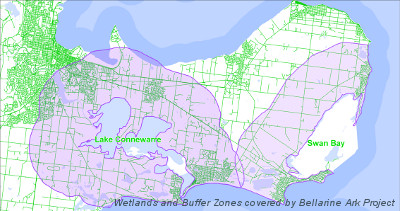 The Bellarine wetlands are of significant value in terms of providing habitat, refuge and feeding grounds for wildlife including many migratory birds and some threatened and endangered bird species including the Hooded Plover and the Orange Bellied Parrot. Many migratory birds which inhabit these wetlands fly in from as far away as Russia and Alaska in the Northern Hemisphere. As an introduced predator, foxes cause significant damage to many of these species. 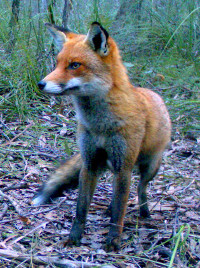 Strategically planned activities include an annual fox baiting program, den fumigation and destruction, harbour removal, monitoring of foxes and their impact, community surveys and a community education program. Baiting is carried out by contractors or licensed landholders and is carefully managed to ensure minimal impact on the environment and maximum effect on fox populations. To date the baiting program has had an impact on close to 6,000 hectares and includes a 5 kilometre buffer zone around both Swan Bay and Lake Connewarre.

The program first began in early 2004 when it was initially managed by Parks Victoria. These days it is managed by the Bellarine Landcare Group and is a coordinated effort involving Parks Victoria, the City of Greater Geelong, the Barwon Coast Committee of Management, Barwon Water and community landholders. It relies on public land managers and private landholders working together to undertake activities which will result in effective control and population reduction of both foxes and feral cats.

While the focus of this project is on fox and feral cat populations, responsible pet ownership and management of domestic pets including cats and dogs is also encouraged. Our lifestyles on the Bellarine Peninsula are enhanced by the diverse range of natural wetlands and their native flora and fauna. The success of the program relies on all members of the community getting involved, from farmers and rural landholders becoming part of the direct fox control efforts to urban communities undertaking responsibility for their pets whether it be walking their dogs on the beach where native bird habitat can be impacted or controlling their domestic cats of a night time to reduce native bird predation.